We do NOT accept any returns on items sold through our store. We will not cancel or refund an order that has already been shipped. In the case where your order has been received and processed but not shipped, you will be charged a 5% restocking fee to cancel your order. This restocking fee goes towards our time and labor spent to get your order ready to ship. Please do not waste our time and we will not waste yours. By submitting your order; you are agreeing to our terms. 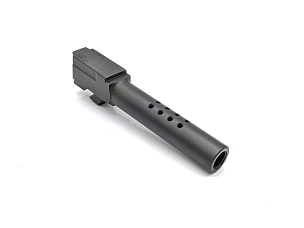 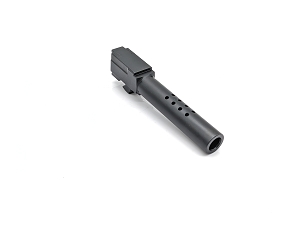 For a unique take on the original Glock barrels, consider upgrading to a custom OEM ported barrel, which is a custom modification made Black Phoenix Customs,  and not the Glock factory. But the design of these barrels has been altered by the incorporation of ports, which are small openings drilled into the barrel's crown. Recoil and muzzle rise can be mitigated by the use of these ports, which are constructed to divert some of the gas from the fired round. A custom original equipment manufacturer (OEM) ported barrel increases the firearm's stability and control, which is one of its main advantages. Recoil from the fired round is reduced by the redirected gas, allowing the shooter to keep their sights on target and make more accurate shots in quick succession. This is helpful for shooters in any situation where a quick and accurate follow-up shot is essential, but it's especially useful in competition. Also, the muzzle rise is mitigated by the ports, making it less of a challenge to keep the gun on target, even when firing rapidly.
Precision is improved with custom OEM ported barrels, which is a major plus. More consistent and accurate shots may be achieved due to less gun movement caused by recoil and muzzle rise. It's especially useful for long-range shooting, where even slight variations in gun movement can have a big impact on shot accuracy. It is also the intention of the designers to make the maintenance of custom OEM ported barrels as simple as possible. Ports are precisely and consistently cut into the barrel by state-of-the-art computer-controlled machinery. The ports won't get clogged up or damaged from regular use, and the barrel will require the same care as any other.
TOP
0 Items
Items
Qty.
Price
Subtotal:
View Cart
Checkout